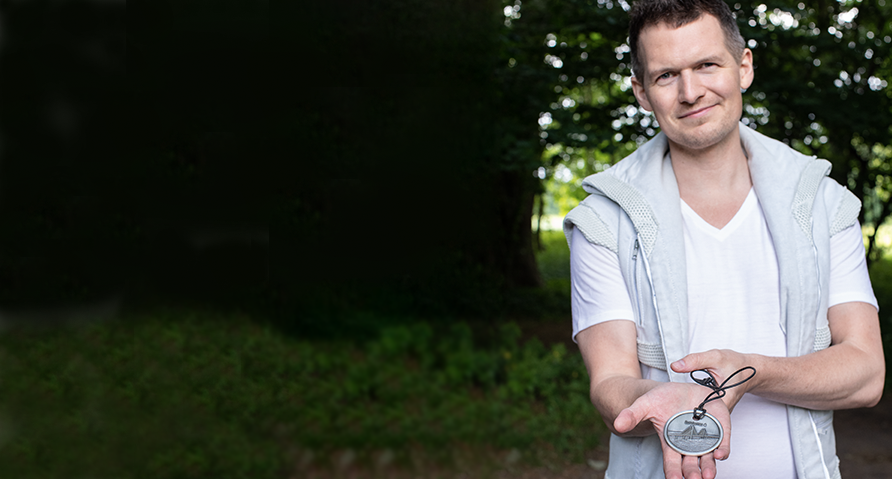 Meet the designer behind the EuroGames 2021 medals, Mads Adam Heindorf.

In 2009, the jeweller and designer Mads Adam Heindorf was commissioned to design the medals to one of the largest international sports and cultural events ever held in Denmark, World OutGames hosted by Pan Idræt . This year he will once again have the honor of designing the medals for EuroGames, which will take place in August in Copenhagen and Malmö.

Mads Adam grew up on a farm in Langeland, a small island south of Denmark’s third largest Island, Fyn. He describes his parents as “hippies” creating lakes and planting forests. Besides keeping Highland Cattle there were wild horses roaming around freely.

“I grew up close to nature and was used to being able to jump on a horse and go for a ride in the mornings if I wanted to” he says.

At the age of seventeen, Mads Adam was already both director of a goldsmiths business and an apprentice. When he told his parents he wanted to become a goldsmith they simply opened a jewellery store together with him and hired the goldsmith John Cloos to teach him.

“As I said, I have parents who think a little outside the box. The shop was a fantastic playground. John was such an amazing man and a great inspiration. Before he had several shops in Sjælland and also worked as a goldsmith all around the world. John knew everything there is to know about the craft; designing, engraving, setting and much more. It was amazing to see how he started with nothing, just a lump of gold, and then follow how he shaped that lump into a small sculpture with precious stones. But he also had a real temper and scolded me when I did something wrong. At the same time he was very loving and I have fond memories of us singing opera together in the workshop.” he says.

The education took four years for him to finish and then Mads Adam moved to Copenhagen. When he got the assignment for the World OutGames 2009, he had just arrived in Copenhagen. The hosts from Pan Idræt were very pleased with the results, so they contacted him to ask if he wanted to do the same thing again for Copenhagen 2021.

A medal to be proud of

Christian Bigom, Chairperson of Pan Idræt said “We wanted the medals to represent the fact that WorldPride and EuroGames are in both Copenhagen and Malmö, in Denmark and in Sweden. We were also quite clear on an early stage that they should be made of a sustainable material. And it should be a rather simple design so that it would be something the winners could hang in the living room. Something that they would be proud of and would like to show off. Mads Adam is a very talented designer and we are very happy with his design.”

A creative process with soul

After Mads Adam was asked, they had a dialogue about what they should look like. It has been a creative process over a long period of time with discussing ideas, finding the right materials and manufacturer.

“Early we decided to stick to a round basic shape where we have both the Copenhagen 2021 logo on one side and the Øresund bridge that connects Copenhagen and Malmö and the symbolic value of the community between the two countries on the other,” Mads Adam says.

Often before he starts to design a piece of jewelry he sits down and meditates on it – and so he has done with these too.

“To get the soul into them they should not only look good, they should also have a strong charisma that will speak to those who wear them. It should be something that the bearer is proud of and that looks and feel beautiful. And to say so myself, I think they have turned out not only beautiful, but also feel very nice to hold in your hand. They have weight and gravity.” He says.

Mads Adam, himself being part of the LGBTI+ community, also played a role in the creation of the medals. “My starting point from the beginning was that I wanted to contribute. It is fantastic both WorldPride and EuroGames are coming to Copenhagen and Malmö. It’s huge! It is a very important event that will put a lot of focus on the LGBTI + environment, not only in Denmark and Sweden and the other Nordic countries, but globally. All preparatory work is a gift from me to EuroGames. It’s more a matter of the heart, than anything I want to make money on.” he says.

Mads Adam believes WorldPride and EuroGames can help improve lives of LGBTI + people. “I myself grew up on a small island. Back then, twenty years ago, homosexuality was not something that was talked about. I didn’t come out to my classmates until after we had graduated. I was unsure how people would take it. I had long hair and was quite specially dressed and my parents were looked upon as a little weird in the traditional farmer’s community. I thought it would be too much for them if I also, on top of that, would have come out. Today, when I look back, I wish I had the courage to come out earlier and to stand up for who I was and that is exactly what WorldPride and EuroGames is all about. To show the world that society is made up of so many different kinds of people. And that there is room for all of us! We are individuals and there are no right or wrongs – we are just different. I think WorldPride and EuroGames can help put focus on this,” he says.

Besides seeing the gold, silver and bronze medals hanging from the neck of the proud winners from the more than 20 different sports tournaments (one of the biggest EuroGames ever) he looks forward to a great party. “Pride is always fun. For me, it’s a love party everyone is invited to. A party where we celebrate love, no matter what shape it has.”