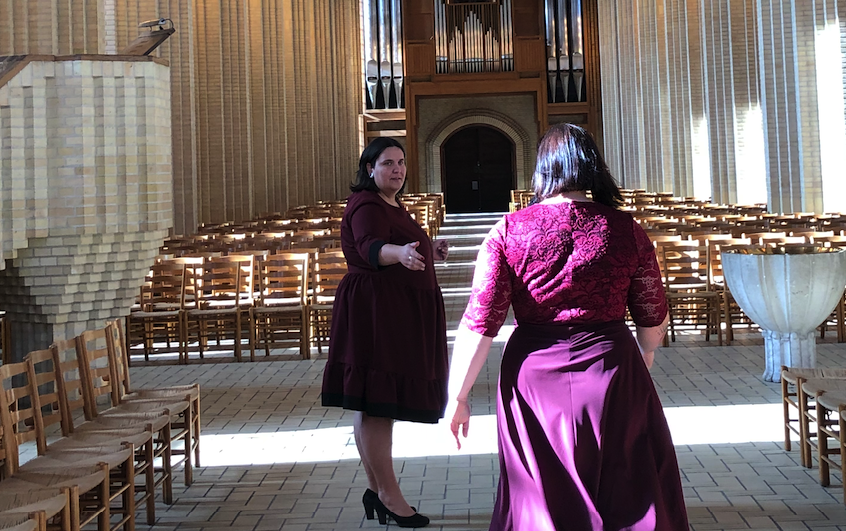 On Sunday 21 February, Jana and Lilita from Latvia celebrate the second anniversary of their wedding at Copenhagen City Hall.

“Getting married in Copenhagen was the only option for us. In our homeland, Latvia, it doesn’t count. Officially we are only friends living together” Jana says.

Why did you choose to get married in City Hall?

“Everybody we knew was going to Portugal to get married. We don’t like to do things everybody else does, so we decided it would be a small wedding in Copenhagen and in February,” Lilita says.

Jana adds: “But the main reason was that Copenhagen was close to Latvia and one of my best friends is Danish. She also helped us a lot with translating the necessary documents.”

When they arrived at the Copenhagen City Hall they were amazed how beautiful it was.  “We were so excited!” Jana says.

The ceremony wasn’t very long, maybe ten to fifteen minutes. The following day they had a religious ceremony in Grundtvig’s Church where they exchanged their rings. It was a great experience and a very romantic moment for them. Something to tell their kids about in the future.

“They closed the church for us and the organ player played the wedding march as we walked down the aisle. It was a fantastic, sunny day. The church was so big and bright and we felt so lucky!” Jana says.

Is there a difference how you look at your relationship after you got married? Or how others look at you?

“I feel pretty much the same, but maybe the insight that we have more responsibility to each other now. Our close friends also see us as a married couple. Some LGBTI+ couples we know, said they don’t want to get married until it is legally allowed in Latvia,” Lilita says.

Jana feels saying ‘yes’ in Copenhagen City Hall and exchanging rings in Grundtvig’s Church shows that she was ready to spend her life together with Lilita for better and for worse. “It was important for me to show myself, Lilita, my friends and family it was not just a phase, but for life,” she says.

On 20 August visitors to WorldPride and EuroGames will be able to tie the knot. What is your advice to them?

Jana: “Go there with an open heart and open mind. Enjoy the special moment. It is a memory for life.”

Lilita: “It is such a great experience. The people who worked there didn’t look at us as just another couple. They were interested in us and they made us feel very welcome.”

Lastly, the theme of Copenhagen 2021 WorldPride and EuroGames is #YouAreIncluded. What does the hashtag mean to you?

“For me it is a little painful and sad because in our country we are not included and it is a goal we can only try to reach,” Jana says.

Lilita feels the same. “In my life I am always trying to understand and include people. But if they don’t include me, that makes me sad. I want to be included.”

Jana and Lilita also spoke to the #YouAreIncluded Podcast about their wedding. Listen to Episode 7 here.

Jana and Lilita were talking to Anders Kungsman. Images supplied by the couple. Photographer: Kristine Garina