Why Autism Inclusion is infinitely better than just awareness

"As a bisexual, I can see parallels with conversion therapy." 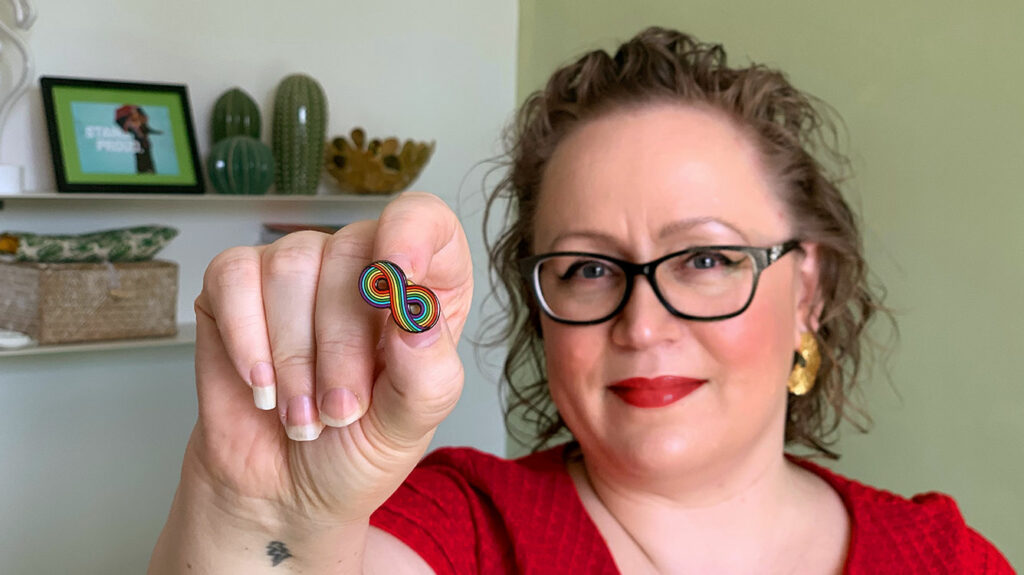 Camilla is Copenhagen 2021’s Graphic Designer, and blogs today about autism inclusion, and why that’s more important than ‘awareness’.

Meaning that we have many commonalities, but that we’re the sum of our parts and though autism affects us all, it doesn’t affect us all in exactly the same way. This also means that we’re not some huge homogenous group that agree on absolutely everything.

What I’m writing here is my personal opinion. Though there are a significant number of autistic people – both some I know personally and some I’ve only encountered online – that share these views.

It’s not that awareness in itself is a bad thing. But if the awareness amounts merely to autism = exists, checkmark and doesn’t make people aware that what we really need is inclusion, accept and respect, then what’s the point?

On top of that there are also organisations out there spreading the wrong kind of awareness. The kind that label us as defective. The kind that’s not accepting of our autistic identity. The kind that will treat us all as one and the same, rather than acknowledge that autism is in fact a spectrum. Organisations that view autism only as a negative and thus promote unethical and often painful therapies meant to curb our natural and harmless behaviour such as stimming (an autistic coping mechanism), forcing eye contact and breaking our routines. Which let’s be honest is more about avoiding potential embarrassment for neurotypical family members when out in public, than about caring for the autistic individual.

As a bisexual I can’t but help see a parallel to parents sending their LGBTI+ child to conversion therapy, because they firmly believe that life will be hard on their child if they’re not straight. Only in this case the aim is for the child to be neurotypical.

I am not a puzzle

The puzzle piece is a well-known symbol of autism. I used to wear a puzzle pin myself thinking it was a positive thing, that I was spreading awareness. But now I know better. As a graphic designer I appreciate the sentiment behind the original design way back in 1963. The idea was that it should represent the complexity of autism. But we’ve come a long way since then in our knowledge and understanding of the autistic spectrum and neurodiversity.

For many on the autistic spectrum – myself included – the puzzle piece is problematic for a number of reasons.

The puzzle piece represents an enigma, something that has a solution. It suggests that – well, like a puzzle – we’re a problem or a challenge that needs to be solved. That there’s something inherently wrong with our identity. Something negative that needs to be cured. Or as portrayed in the 2009 film from Autism Speaks, I am Autism wherein they compare autism to an invisible monster that knows where you live and will strike at you and your family if you as much as blink.

To infinity and beyond

These days many autistic people are finding their voice on social media. And many have found safe spaces and communities online. A film released only this year sparked much outrage in the autistic community but through social media we fought back. In the film the potentially lethal prone restraint was portrayed as a positive, as kindness. The attitude from the filmmakers towards the autistic people calling the film out as ableist was anything but inclusive, but we found comfort and strength in each other as a community.

Today many autistic people are opting to using the Rainbow Infinity symbol as a symbol autism as it shows the diversity of the spectrum as well as the greater neurodiversity movement, rather than painting us as a group of misfits that need to be cured. And the fact that it can have a double meaning for neurodiverse LGBTI+ people only make me as bi person even more proud to wear it.

There are also those among us calling for Autism Awareness Month to be relabelled Autism Acceptance Month in order to change the narrative of autism from pity and disempowerment to one of respect and inclusion.

Personally, I won’t take part in the Autism Speaks #LightUpBlue campaign this month but opt to go #RedInstead because nothing about us without us.

And finally, I encourage everyone to respect our autistic needs. Make schools, offices and public spaces inclusive for everyone, both for those who are and aren’t neurodiverse. And if you’re ever in doubt, just ask.

Oh, and one more thing. I’m over the moon to be part of an event with such an inclusive approach to accessibility, it’s truly does make me feel included. You can read more about accessibility during the Copenhagen 2021 here.