Why your business should visibly support Copenhagen 2021

All businesses improve their customer and employee's experience when they embrace Copenhagen 2021. 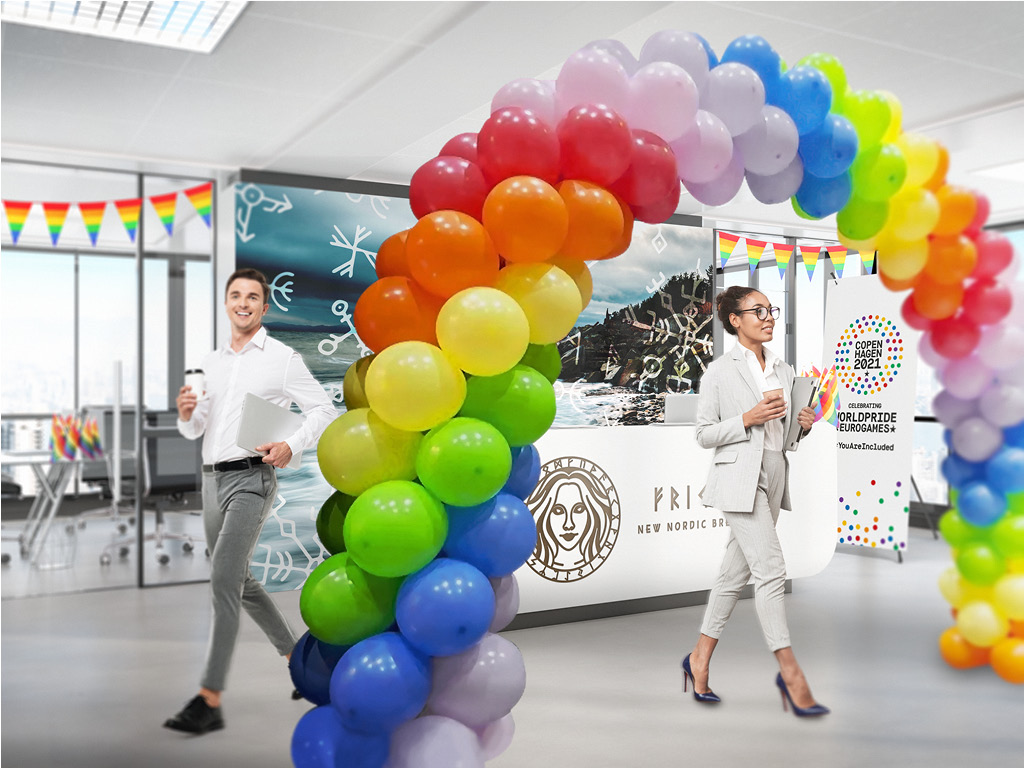 In a personal blog, our graphic designer Camilla reflects on the personal impact when a previous employer supported Pride.

It was raining that morning when I left for work, so I brought my umbrella. The rainbow one. This was a few years ago, I’d only worked at the company for a couple of months, and I wasn’t out at work. Not intentionally, it just hadn’t come up.

When I arrived at work, I left the umbrella to dry in the communal toilets, and kind of forgot about it. That is until a colleague walks into our open office and said – quite loud – “who does that rainbow umbrella belong to?” I replied: “It’s mine”. To which they cockily responded: “It’s quite … gay?”.

Their response annoyed me, as it triggered experiences of a former workplace that was definitely not a friendly environment to be anything but heteronormative, and my reply was probably a little terse: “Well, then it fits me fine, as I’m bisexual!”.

And that was that. I was now officially out at work.

However, despite being out, it didn’t make me feel more included as such. Accepted, yes, included no. At least not until a few years later when the company officially sponsored Copenhagen Pride.

A little background here, the company was a large baby equipment retailer, and absolutely everything was gendered, heteronormative and straight. Everything was pink & blue – toys, apparel, pacifiers. Everything. One of the first campaigns I designed was literally called ‘Pink & Blue’ (and no, it wasn’t my idea).

So, I was honestly quite (positively) surprised that we were sponsoring Copenhagen Pride. I grew a few inches, I walked a little prouder, and I actually became more assertive. All because I felt included.

With the sponsorship also came the need to advertise to a new demographic. Yes, let’s be real here, corporate sponsors are still in the profit earning business. And when they do CSR, it’s (often) viewed as an investment. For our Pride campaign we had a lovely photoshoot with two LGBTI+ couples. And I was thrilled. This was such a game changer.

But the sponsorship still sparked debate within the company. One colleague sneeringly said they didn’t get “why we should sponsor a glitter party, because how was that in any way related to our products?”. And I was glad to be able to tell her of some of the other aspects of Pride, such as the Human Rights programme, which they knew nothing about. We also talked about rainbow families, and the importance of representation. In the end we had a really good chat about the struggles of LGBTI+ people, both in Denmark and abroad.

Other colleagues also took an interest asking me what I was wearing for the parade. When did I know I was bisexual. And many other interesting questions. Many also kindly wished me a Happy Pride!

Perhaps on the surface this company with its gendering and heteronormativity didn’t initially look like the perfect candidate for a Pride sponsorship.

But actually, the sponsorship was a win-win-win as it sparked internal debate and ultimately led to a better understanding of the importance of Pride.

It’s also a reality that Pride organisations holding events of this magnitude, could not happen without donations from corporate sponsors. That doesn’t mean that we should just take money from any company. At Copenhagen 2021 we have a high ethical standard that we apply in considering a potential partner or sponsor.

The sponsorship also had a glorious impact on me personally, as it made me feel truly seen and included.

We’ve launched a range of official Deco Products to help you decorate your office, retail outlet, school, bar or restaurant and show your support for WorldPride and EuroGames. Find out more!